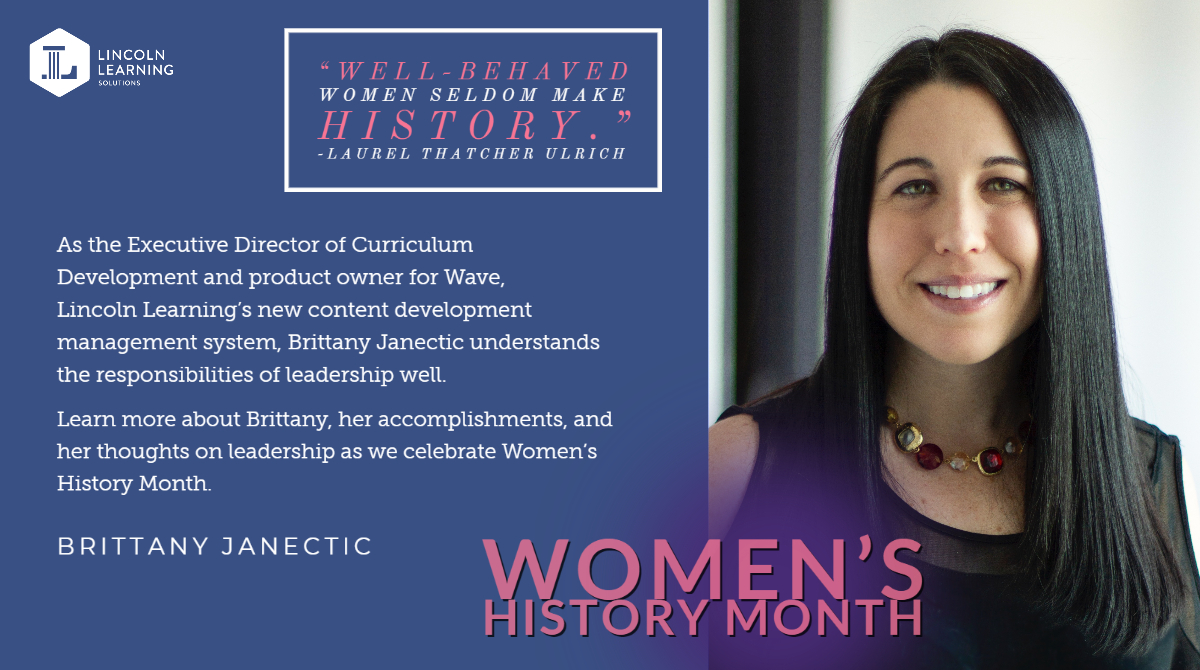 Nearly 40 years ago, Congress and the President designated March as Women’s History Month to recognize women and their significant contributions to America.

This year, Lincoln Learning will highlight female leaders in the organization and their contributions to its history. Their leadership has helped Lincoln Learning become the thriving educational nonprofit it is today.

Executive Director of Curriculum Development Brittany Janectic began her career with Lincoln Learning Solutions ten years ago as a teacher facilitator and rose through the ranks to her current position.

Last year, Brittany accepted the role of product owner for Wave, Lincoln Learning’s new content development management system. She said this career accomplishment is the one of which she is most proud.

“It took me out of my comfort zone,” Brittany said. “It allowed me to be involved in a completely different technological capacity than I ever would as an English teacher.”

Brittany sees leadership as a twofold model. First, she said that a leader guides and supports a team as a whole and its members individually. Most importantly, she sees a leader as someone who is willing to do anything he or she would ask of someone else; nothing is above or below a leader.

"Take risks, don’t fear change, and know your worth."

Brittany points to Michelle Obama as an influencer on her leadership ideals.

“During her time as the First Lady, Michelle advocated for a number of issues that I strongly believe in, such as the importance of education and health/nutrition. All the while, Michelle did so with class and sophistication,” Brittany said. “She is a smart, elegant, and fashionable career woman, wife, and mother.”

“The most significant barriers to female leadership,” Brittany said, “are failing to abandon archaic ideologies about gender differences and disregarding a woman’s capabilities as a knowledgeable and equal human being. Traditionally, and unfortunately, [these ideologies] continue to hinder female leadership.”

Her advice to the next generation of female leaders is simple: take risks, don’t fear change, and know your worth.

Rising to the Challenge

As we continue to highlight the female leadership at Lincoln Learning during Women’s History Month,...