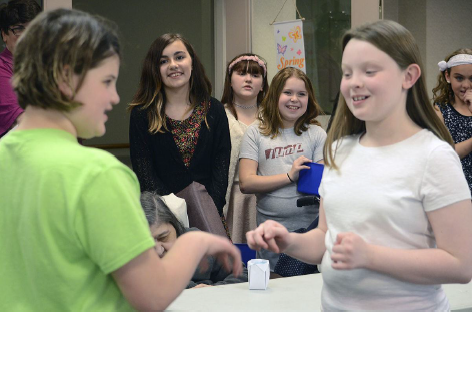 A group of about 15 Baden Academy Charter School pupils dashed from table to table of a Villa St. Joseph activities room on a recent Thursday afternoon, lending helping hands and smiles to residents of the rehabilitation and nursing center.

The pupils, all members of the charter school’s Take Action Club, spent the afternoon helping Villa St. Joseph residents as they filled hollow plastic eggs with foil-wrapped chocolates and packages of Skittles, Starbursts and M&Ms ahead of the facility's annual Easter egg hunt, which local children are invited to participate in.

Once the eggs were filled, children and residents bonded over charades, board games and selfies snapped with iPads.

The activity was organized by fifth-grader Aleenia Reich, who launched the charter school’s after-school service learning club about two years ago.

The Take Action Club has coordinated fundraisers to benefit children and families locally and throughout the world. Thursday's service activity was the club's first volunteer opportunity outside the school building.

During the last two years, Aleenia has led the club as it tackled a variety of charitable initiatives, including a food drive to benefit Pittsburgh’s PPG Food Bank, and the group helped the school raise more than $20,000 during two Math-a-Thon Fundraisers for St. Jude Children’s Research Hospital.

The club's fundraising campaigns have also taken a global focus, and it has raised about $300 selling colorful Rafiki bracelets to promote education and clean-water initiatives in Kenya.

The club has also led educational campaigns to raise awareness about issues such as child labor, global poverty, and access to clean water and education in Africa.

As the group’s founder and organizer, Aleenia has spent hours researching upcoming campaigns, creating lesson plans ahead of each meeting and designing fliers to advertise events.

Aleenia’s efforts received a statewide nod in March, when the Pennsylvania Statewide Afterschool/Youth Development Network named her a 2017 After-School Champion. Aleenia was the youngest of this year’s 13 honorees, all of whom were nominated for their work developing and leading high quality after-school programming.

Children’s Media Lab projects usually align with their passions and range from after-school clubs like Aleenia’s to illustrated books to student-designed websites, said Ellen Cavanaugh, who oversees the program.

Whatever the medium, the project must demonstrably benefit the school, local community or the world, Cavanaugh said.

Pupils interested in Media Lab fellowships submit an application, which includes their research interests, at the beginning of the school year. They then work with Cavanaugh to identify a project that best showcases their passion and talents.

Aleenia said she applied for the program with a clear focus in mind.

“I wanted to help people in my community spread peace,” she said.

Cavanaugh suggested that Aleenia use campaigns and lesson frameworks from the WE Schools Program, sponsored by international humanitarian organization the WE Movement. The WE Schools Program provides educational resources and service campaigns to help students learn about local and global social justice issues such as hunger, poverty and lack of education.

Aleenia spends about 40 minutes each week in the charter school’s Media Lab researching and planning for future activities. Once she has identified potential charitable campaign topics, club members vote to determine what they’d most like to learn about.

Aleena then uses WE Schools curriculum to guide and enhance each meeting’s lesson. Through the site, Aleenia can choose from an array of age-appropriate videos, statistics and fundraising campaigns for each issue.

Fifth-grade teacher Taylor Breaden, who co-moderates the club with fourth-grade teacher Sara McMillen, said Aleenia is a self-starter and does most of the research and planning without any help, although the moderators offer advice and tips when she asks.

Aleenia’s grandmother Patty Reich says her granddaughter has always had a caring instinct, and she’s expanded her interest in social justice issues during her time at Baden Academy.

“She’s definitely a leader, and she takes pride in what she does,” Reich said.

A Beaver teen gained a wealth of business and entrepreneurial insight over the summer after...